<< Back to previous page 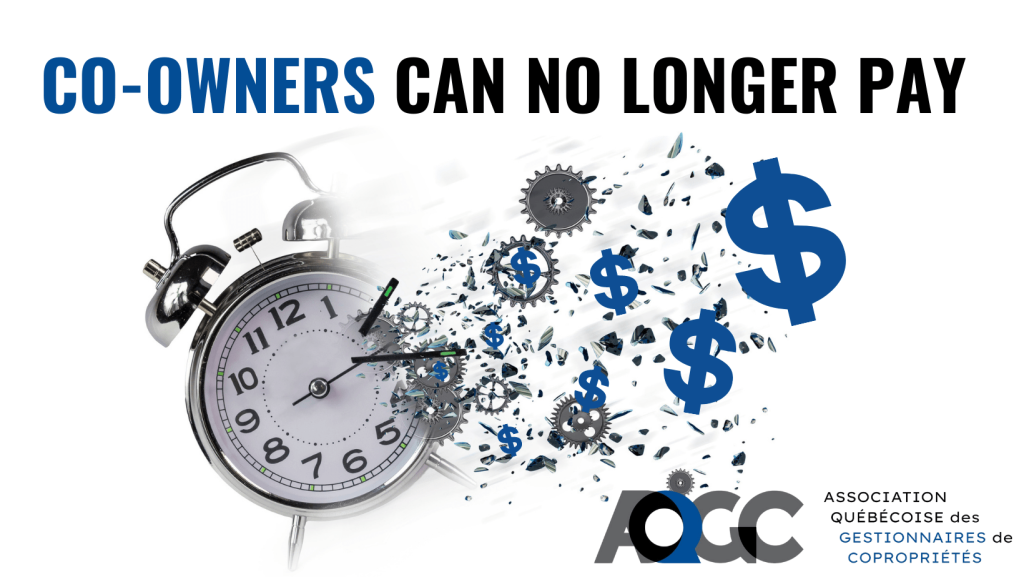 Co-owners can no longer pay instead of insurers

Article 1074.2 of the Civil Code of Québec (C.c.Q) came into force on December 13, 2018.  Since then, it has been quite a headache in co-ownership, as the insurers of the co-owners refuse to compensate their insureds when a loss emanates from their unit. It is therefore the community of co-owners who find themselves paying for the restoration work of the affected private and common portions, even though there is a co-owner “responsible” for the loss, with little hope of being compensated by the insurer of the co-owner at “fault.”

Since 2018, co-owners have been paying instead of insurers due to a poorly crafted legislative change.

The AQGC denounces the government’s inaction and slowness in providing concrete solutions. The change that the Ministry of Finance wants to make in a draft regulation [1] aims to cap the contribution to the self-insurance fund at $100,000 will be of little use to a vast majority of condominiums in Quebec.

Let us remember that this new self-insurance fund must be used by syndicates to provide sufficient liquidity to pay the amounts of insurance deductibles for all claims that the individual insurers of the co-owners refuse to assume following the legislative change put in place in December 2018. However, this self-insurance fund could indeed be reduced if we returned to a successful insurance plan. Until then, whether we cap the contribution to this fund at $100,000 or not, in the end it will always be the co-owners who will pay the bill.

For all intents and purposes such a legislative change is useless. This is especially true considering that it is likely to divert the attention and efforts that should be put by the legislator on the real issues of condominium insurance: To bring back an efficient and balanced insurance plan for all its actors.

To resolve the situation in a sustainable way, we must focus on:

Insurers no longer want to compensate for impairment claims

The condominium sector needs insurers who want to insure buildings. The change in the legislative context in condominium insurance since 2018, although it helps insurers in the immediate future, since they no longer compensate syndicates, is excessively damaging to the attractiveness of the real estate and economic sector that co-ownership represents.

The situation is unbearable and is becoming ridiculous

With this reform of the insurance sector came an obligation for co-owners to subscribe to a civil liability insurance policy of one or two million dollars depending on the size of their building. Many co-owners come to wonder why they pay such insurance premiums since insurers never pay when the syndicate tries to engage the responsibility of a co-owner following a disaster in his unit. [2]

In addition, syndicate insurance premiums and deductibles (up to $500,000) in the industry continue to rise, while their risk are reduced due to these same higher deductibles and self-insurance funds. Still insurers have continued to withdraw from the condominium sector, further reducing choice in the market.

All this needs to also be placed in the context that the new system in place removes the responsibility of the individual to the detriment of the community of co-owners, causing a moral hazard. Currently, syndicates are obliged to make reparation for the damage caused to the building, with no guarantee of compensation other than by undertaking lengthy and costly legal proceedings.

The co-owners no longer have the ability to pay!

Co-owners have limited ability to pay and are currently besieged on all sides by the significant increases in condominium fees that result from the obligations provided for in the many bills that have come into force since 2020 (Bills 16, 141, 41, etc.). The dysfunction of the insurance sector is too much to take, and a major financial irritant that must be resolved quickly. The AQGC urges the Government to put the required energy into it.

On November 8, the Association Québécoise des Gestionnaires de Copropriétés (AQGC) filed a petition with the National Assembly of Quebec. To date, nearly 8,000 signatories (petitions) have supported the AQGC’s approach to changing the rules surrounding this new insurance plan: Quebec co-owners hope to be heard!

The AQGC therefore reiterates the importance of including all actors on the ground in the search for a sustainable solution to the insurance issues and problems affecting co-ownership, as set out in our brief submitted last November to the various ministers and Members of Parliament.

[1] Regulation amending the Regulation establishing various measures for the insurance of divided co-ownerships, THE OFFICIAL GAZETTE OF QUÉBEC, February 2, 2022, Year 154, No. 5, page 420

Be the first to know with the blog newsletter